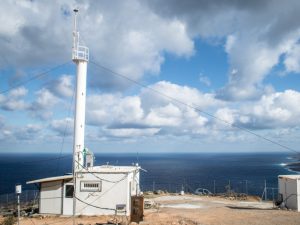 The University of Crete ‘Finokalia’ station, is the central station of PANACEA and is considered representative of the atmospheric background of the Eastern Mediterranean. It is the oldest observation station for atmospheric composition in the wider area as it has been operating since 1993.
The station is located at Finokalia Lasithiou (35° 20’N, 25° 40’A), in the northern part of Crete in the Municipality of Ag. Nikolaos. It is located at an altitude of 250 m, close to the coastline, having a seamless front to the sea from East to West. No significant human activities are observed in the area less than 15 km.
The region is characterized by two distinct seasons: the dry season (from April to September), with increased levels of pollution being transported from Europe and Turkey, and the wet season (from October to April) with lower pollution loads. Significant dust transportation from the deserts of North Africa is observed when southbound winds predominate.
The station is actively involved in various international environmental station networks, prominently positioned as a superstation in the European research infrastructure Aerosol, Clouds and Trace Gases Research Infrastructure-ACTRIS (ESFRI roadmap 2016). Data from the station is provided to national bodies responsible for air quality control and the most reliable international databases: Ministry of the Environment, the EMEP (European Monitoring and Evaluation Program) database, the network, the ICOS network (Integrated Carbon Observation System), in the AERONET network (AErosol RObotic NETwork) and in the ILTER network (International Long Term Ecological Research Network).
Reference to databases requires the quality assurance and certification of the measurements made.The excellence of the work produced at Finokalia is reflected in a total of 200 publications in scientific journals, 30 national and international research projects that are continuously attracted and at the same time educational work with the completion of 20 doctoral and 30 postgraduate diplomas. 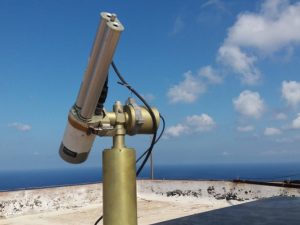 The PANhellenic GEophysical observatory of Antikythera (PANGEA Observatory) was established in 2017 on the island of Antikythera (35.86 N, 23.29 E, 110 m a.s.l), at the initiative of the National Observatory of Athens (NOA). This area selection was based on the NOA’s studies, which indicate that the geographical location of Antikythera is most appropriate for monitoring the gas masses passing through the Central and Eastern Mediterranean region. The island of Antikythera is devoid of anthropogenic activity and is considered ideal for monitoring climatic parameters representative of the wider area. Most types of particulate matter, such as Saharan dust and marine particles, are found here, while volcanic ash from Etna has already been recorded, as well as particles derived from biomass burning and forest fires. In addition, due to the small area and the low altitude, the impact of the island’s topography on the flow of mass gases is considered negligible. Finally, during the summer season, the transfer of pollutants of anthropogenic origin from the large urban centers of the Eastern Mediterranean (eg Athens, Con / city) is favored because of the annual winds blowing in the area. Antikythera Station is a member of the European EARLINET infrastructure (https://www.earlinet.org/index.php?id=earlinet_homepage) and the AERONET network (https://aeronet.gsfc.nasa.gov/). 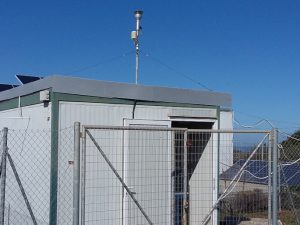 Akrotiri Station is located in a distance of 2 km from the sea, while the area of the Technical University is surrounded by farms and residential areas. The city of Chania has a population of about 54.000 and lies 5 km southwest of the station. Chania Airport “G. Daskalogiannis” is located 6.5 km east of the station, while the port of Souda is 5 km southeast of it. 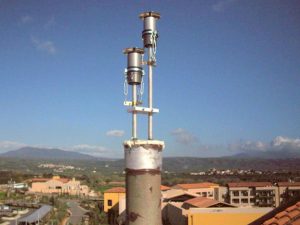 In December 2009, a trilateral agreement was signed in Stockholm by BRFAA with the Bert Bolin Center of the University of Stockholm and Costa Navarino development company, TEMES SA, to establish a Climate and Environmental Change Observatory in the Costa Navarino region, with the name Navarino Environmental Observatory (N.E.O). The Observatory’s activities focus on Climate Change research and their effects on the natural environment and human activities in the Mediterranean region. The initiative aims to create a dynamic hub where scientists from all over the world dealing with modern environmental issues will be able to exchange knowledge and ideas, while at the same time developing new scientific research tools and methods. 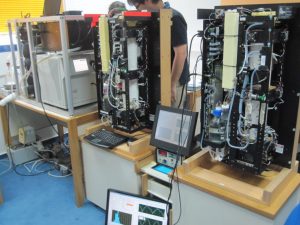 Patras Atmospheric Measurement Station is located at the Institute of Chemical Engineering Sciences (ICE-HT), one of the founding Institutes FORTH (Foundation for Research and Technology, Hellas). ICE-HT / FORTH station is located in Platani Rio (38- 17 ’52’ N, 21- 48 ’31’ A), an eastern suburb of Patras town and about 8 km from the city center. The area is surrounded by low vegetation and olive trees with small settlements within 1 km and University of Patras 2 km. The major anthropogenic activities beyond the city include an industrial area, about 16 km southwest of the city center and the port, about 2.5 km SW from the city center. The activities and the main scientific objectives of the Patras Atmospheric Measurement Station are to study the physical and chemical properties of atmospheric particles and gases related to air pollution. 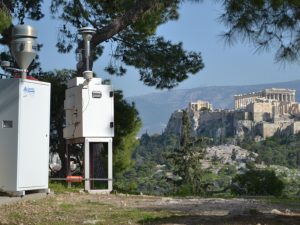 The Thissio Supersite for Atmospheric Air Pollution Monitoring operates since December 2013 at the central premises of the National Observatory of Athens in the historical center of Athens (37.97°N, 23.72° E, 105 m.a.s.l. and at approximately 50m above the mean city level). It is considered as urban background station, reflecting the air pollution of the city of Athens due to the distance from traffic or industrial emission sources. The location (on top of the hill of the Nymphs) is ideal for the characterization of the urban background air quality conditions, as the station overlooks the city center and serves as receptor point, through dispersion and circulation, of aerosols from different potential sources. It is surrounded by a pedestrian zone, a moderately populated residential area and the Filopappou (108 m.a.s.l) and Acropolis hills (150 m.a.s.l) at distance of 500m and 800m respectively, whereas the main traffic lines are at further than 500m. Therefore, the site could be considered representative of the exposure of the majority of population in the Greek capital. 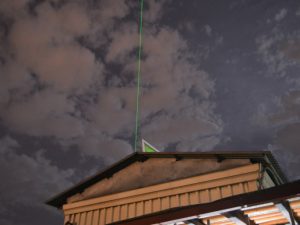 The Laboratory of Atmospheric Physics (LAP) is located in the building of the School of Sciences of the Aristotle University of Thessaloniki (40.63N, 22.95E, 50m ASL) and its facilities are placed in the northwestern part of the campus. The wider area is typical of urban construction while surrounded by central highways. It is within easy reach of the city center, as well as within the Thermaic Gulf and the Sheikh Shu forest. The LAP station is influenced by urban broadcasting and is considered representative of the Thessaloniki city’s exposure to pollutants. It has state-of-the-art scientific equipment, supporting a multitude of research projects aimed at monitoring the atmosphere, actively participating in global measurement networks. With the synergistic use of the Raman LIDAR device, CIMEL solar photometers for over a decade, LAP has been an active member of the EARLINET global networks (https://www.earlinet.org/), ACTRIS (https://www.actris.eu/ ) and AERONET (https://aeronet.gsfc.nasa.gov/). Among other things, it participates in European Union projects related to the certification of satellite observations using terrestrial instruments, which puts LAP in an advantageous position with regard to direct access to satellite observation data. More information on the LAP and description of the equipment available at: http://lap.physics.auth.gr/ 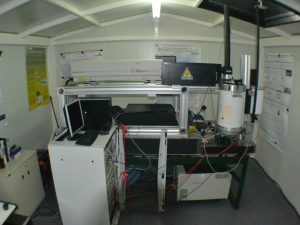 The semi-urban station of the Laser Remote Sensing Laboratory (LRSL) of the National Technical University of Athens (NTUA) focuses on the measurements of Particulate Matter (PMs) and atmospheric gases. It is operational since May 2000 at the NTUA Zografou Campus (37.96°N, 23.78° E, 212m a.s.l.) (https://lrsu.physics.ntua.gr). The station monitors the average air pollution levels at the outer part of the Athens Basin, away from main roads and industrial areas. It is equipped with state-of-the-art laser remote sensing systems to provide the vertical profiles of particles, water vapor and ozone (600-10.000m a.s.l.), as well as the size distribution of the inhalable particles. The station is member of international measurement networks like the Global Atmosphere Watch (GAW-DEM), the World Meteorological Organization (WMO), the European Aerosol, Clouds and Trace Gases Research Infrastructure (ACTRIS) (https://www.actris.eu), the European Lidar Network EARLINET (https://www.earlinet.org), and in the near future, of the Sun Photometer Aerosol Network AERONET (https://aeronet.gsfc.nasa.gov).

The station of the Atmospheric Physics and Technology (APT), team of the Laboratory of Atmospheric Pollution and Antifouling Technology of the Department of Environmental Engineering, DUTH, is located in Kimeria Xanthi, on the edge of a smooth slope facing south, with a valley reaching the beach about 20 km to the south, east and west and the Rhodope Mountains to the north. It is located 1.7 km from the city of Xanthi (population 65,000). At 120 m south of the station there is a provincial light traffic road (East-West direction), with a traffic density of 10 (night hours) up to 150 (rush hour) cars / hour. There are no obstacles less than 30 meters protruding <18° above the horizon. APT is an active member of the pan-European ElectroNet network (https://atmospheric-electricity-net.eu/) and the global GLOCAEM network (https://glocaem.wordpress.com/). More information at: http://atmosphys.env.duth.gr/ 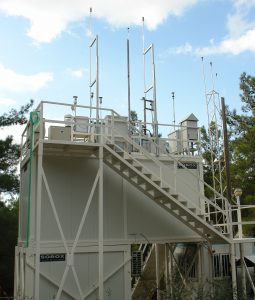 The DEM-Athens Urban background Monitoring station for Aerosol properties has been established at the grounds of the National Centre for Scientific Research “Demokritos” since 2007. It lies in the ERL field site away from direct emission sources in a vegetated area (pine). The area lies 7 km North East of the Historical city centre of Athens within the Metropolitan Area and at an altitude of 270 m.a.s.l on the hillside of Hymmetus mountain. The site is characteristic of the suburban areas of the Athens valley, partly influenced by Urban emissions and partly by incoming regional atmospheric aerosol.
Submitting data to the World Data Centre for Aerosols for Global Atmosphere Watch (GAW), Aerosol, Clouds and Trace Gases Research Infrastructure (ACTRIS) and the Emergency Response Radioactivity Network Ro5 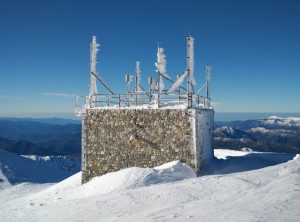 Climate Change station (HAC)2 is a high altitude station in Greece, recently established by NCSR ‘Demokritos’ Environmental Radioactivity Laboratory. The measurements of atmospheric aerosols parameters and concentrations of gases related to climate change, started at the end of 2015. (HAC)2 station is located at the Neraidorachi peak 2314 m a.s.l. on Helmos mountain, Northern Peloponnese, 37.984 N 22.196 E. It is the only station at high altitude for atmospheric research in the region of the eastern Mediterranean and aims to study physical-chemical characteristics of aerosols and climate gases.